INTJ vs INTP. Both types seem similar at first. They share the same “INT-” letters, indicating that they might resemble one another. But in what way? And how do they differ?

Here’s a quick video (1 minute) for you to get the gist of what mental processes INTJs use.

Summary of the INTJ cognitive functions:

Remember! These are all unconscious processes – the person is not aware that they process information and make decisions like that!

If a person does not use those mental processes, they are not an INTJ.

Knowing this will help you understand the differences with INTPs.

Here’s a quick video (1 minute) for you to get the gist of what mental processes INTPs use.

Summary of the INTP cognitive functions:

If a person does not use those mental processes, they are not an INTP.

Knowing this will help you understand the differences with INTJs.

Summing up the cognitive differences between INTJ vs INTP

So, in the INTJ vs INTP cognitive battle, we observe that the two types don’t use the same mental processes. They are very distinct psychological types: they don’t make decisions based on the same criteria and don’t have the same way of processing information. They’re not complete opposites, but do approach life very differently. They don’t use any of the same mental processes and don’t have the same priorities (INTPs have their decision making function as a dominant cognitive process, Introverted Thinking, and INTJs have their perceiving function first, Introverted Intuition).

One person cannot be in between those two types.

However, even if INTJs and INTPs don’t come from the same place (in terms of cognitive processes), they do sometimes face similar challenges in the outer world and end up having common strengths. It’s like when you managed to get the same results in your math exam as your friend but you both used a different reasoning. Except that here nobody is “wrong” 🙂

Summary of INTJ vs INTP strengths and weaknesses

In the light of their respective cognitive functions we can draw both types’ strengths and weaknesses.

Please read those positive and negative aspects as “INTJs/INTPs are more prone than other types to be… great at this or that”. It doesn’t mean that others types can’t have these strengths and weaknesses. We’re focusing on what people are “more likely to”. That’s a basic MBTI principle you should never forget 😉

The column to the left are strengths that usually come from using Introverted Intuition as a dominant function. The column to the right shows the abilities Extraverted Thinking might give INTJs.

INTJs’ biggest challenge will be to face the chaos of the outer world and how fast it changes. They want to be able to predict everything because their main function, Introverted Intuition, likes to narrow down possibilities. They don’t want to explore every possibility. If they don’t know what to expect, INTJs get the feeling that life = chaos. If life doesn’t make sense, they need to fix it and it’s draining. INTPs, on the other hand, don’t mind not knowing what to expect (because they use Extraverted Intuition). They actually prefer not too much planning and keeping their options open.

To a lesser degree (theoretically), INTJs will be challenged by listening to their inner “irrational” voice/”their heart”, because it’s not “rational” enough (the way Extraverted Thinking appears to be to them). As a consequence, they will find it hard to consider personal opinions as valid arguments or emotions and feelings when making decisions. This can lead to an outbreak of emotion when Introverted Feeling backfires and expresses itself without any filter because it’s been bottled up for too long. For this reason, INTJs can be more prone to outbursts of anger than INTPs.

INTPs’ weaknesses will be mainly their inability to open up to other people and to understand other people on a personal level (due to their inferior Extraverted Feeling function). This makes them appear uninterested in other people’s feelings, as if they had no empathy. INTPs prefer to understand people “logically”, “in a practical way”.

So, if they ever needed to comfort someone, INTPs may not consider hugging/emotionally comfort that person but rather they will try to understand why they are crying. “Are you crying for this? But that‘s stupid… But that doesn’t matter”. They don’t understand that it is insensitive of them to say such things. “It’s just the truth, it doesn’t make any sense to cry for that reason” they will say, genuinely.

You might think it sounds like INTJs too, however, INTJs don’t come from the same place when they’re being insensitive.

(This is an exaggeration…)

INTPs deal with feelings and subjectivity in a different way than INTJs, in terms of cognitive functions. INTPs dismiss their own subjectivity, whereas INTJs do consider it but it’s not their priority and they feel uneasy about it. INTPs prefer to focus on their own inner logic (their main cognitive function). Obviously, they have emotions too, just like any other human beings but rather than “feeling” their feelings or showing them, they would rather analyze them and make sense of them on their own. This can make them look like they don’t feel anything to outsiders. But don’t judge a book by its cover! They feel very deeply… It’s just that the emotions don’t reach the surface very often. Hence, they’re being less prone to negative emotional outbursts than INTJs. That river runs too deep.

To a lesser degree, INTPs have an issue with confronting their ideas to reality and dealing with day-to-day routine. That’s because they have Introverted Sensing as their tertiary function. So, INTPs may not like to look at concrete details to implement their millions of ideas which makes them “impractical people” and also gives them a particular talent for procrastination (like all xNxP types. We’re the beeeeeeest at procrastinating).

INTJs are more practical (theoretically speaking), because their second favorite cognitive process is Extraverted Thinking which strives for efficiency and will thus be more inclined to implement ideas and projects.

And now a quick visual summary of the INTJ vs INTP topic: what makes them similar and what draws them apart.

Do add “can be” in front of each point when you read the infographic. Cognitive functions don’t make you automatically “like this” or “like that”, they are unconscious mental processes we try to draw likely behaviors from, whether we develop such or such behaviors depends on many factors (environment, education, predispositions, experience…).

And again, the MBTI is about what kind of behavior we show most often. So, not specifically all the time. Ask yourself “Am I more prone to be like [INTJs] most of the time or like [INTPs]?” if you’re wondering which one of the two types you are.

Your type is not your identity. It’s just a helpful tool to understand how you make decisions and how you apprehend the world. Use it to grow as a person. Don’t let it define you. 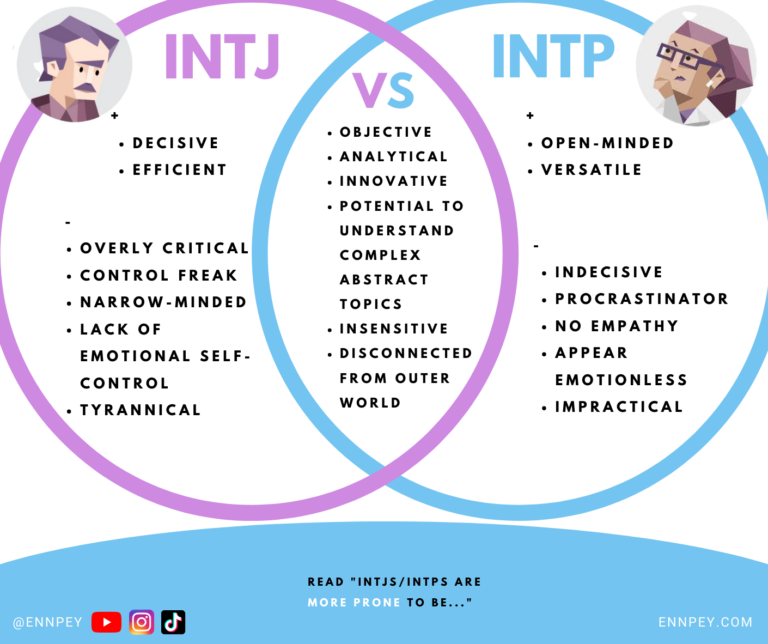 I hope this helped! Thank you for reading 🙂

Check out this article to fully understand the MBTI theory, cognitive functions and all that! 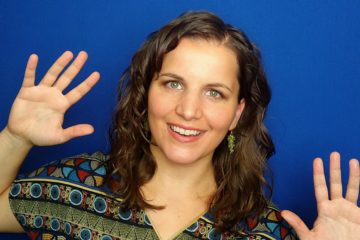 Ennpey’s blog is now on Youtube for quicker, to-the-point MBTI content, but also funny videos about the 16 personalities and especially ENFPs. Do you prefer TikTok or Instagram? See you there! Don’t worry, the blog Read more… 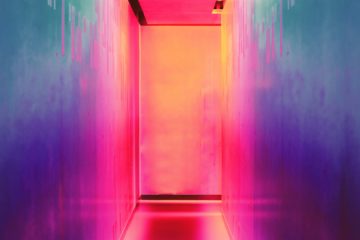 Extraverted Intuition vs Introverted Intuition, you may wonder: What’s the difference? BINGO! Else why would you have clicked on this article? First, let’s put these two concepts back in context. I, Ennpey, your humble servant, Read more… 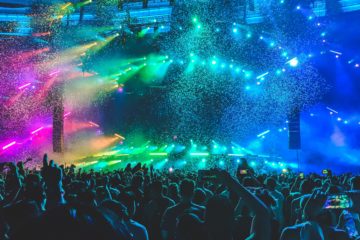 ENFPs’ Cognitive Functions Part 1 – Extraverted Intuition, the most surprising function of them all!

What are an ENFP’s cognitive functions? Hold on, what do these letters mean? Why should you care? Is Extraverted Intuition a disease? This article will answer your thirst for knowledge, young Padawan. One series of 4 articles Read more…